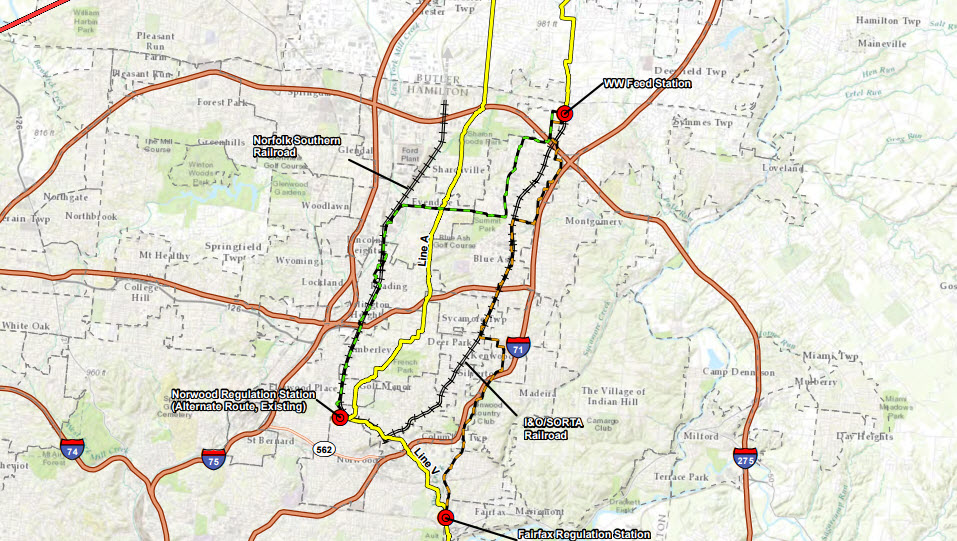 (Golf Manor 9/15/2016) On September 13, 2016, Duke Energy applied to the Ohio Power Siting Board to build a 20-inch diameter, 400 PSI pipeline through neighborhoods in Hamilton County. Two routes have been proposed: a preferred “orange” route that sends the pipeline through neighboring eastern communities; a secondary “green” route will touch the west side of Golf Manor along Wiehe Road and Volunteer Park. Additional information on the project can be found on Duke Energy’s project site.

Your Village Council has voted unanimously to oppose the project. Golf Manor Mayor Ron Hirth has spoken out in opposition of the project to Ohio Governor John Kasich, the Ohio Power Siting Board, The Public Utilities Commission of Ohio and the Hamilton County Commissioners.

We encourage all residents of the Village to get informed about the potential impact this project may have on the Village and surrounding areas and get involved by voicing your opinion. You too can speak out against this project to these community leaders and agencies. Write or call the Ohio Power Siting Board, Ohio Governor Kasich, District 33 Ohio State Representative Alicia Reece, District 9 Ohio State Senator Cecil Thomas, and your Hamilton County Commissioners. NOPECincy (nopecincy.org), a grassroots citizen group opposing the pipeline project, will be holding informational town hall meetings on a regular basis to inform residents and gain support in opposition of this unprecedented threat to our community.

We encourage all residents to attend those meetings and stay on top of this issue.

Shop with a K9 Cop Returns for PRM Students